A. The schedule of classes with detailed description of topics (at main webpage of the subject)

B. Presentations and other materials for the theory and practice sessions

E. Results of midterm and final tests (also a sample test) and the bonus points

B. Presentations and other materials for the theory and practice sessions

Introductory words, information about the prerequisites for the subject, lesson plans

The ecosystem of the Internet, technical and interdisciplinary issues

The AS-level structure of the Internet

Global systems on the Internet: DNS

Global systems on the Internet: IPv6

Lab 7 - Visiting the BIX (Budapest Internet Exchange), the "center" of the Hungarian Internet

During the practice sessions we will use the knowledge that has been said on the theory classes previously. To prepare for practices everybody needs to set up a virtualized environment on his or her notebook

Install the GNS3 software to your notebook from http://www.gns3.com/. The GNS3 is a virtual network construction tool that can be used to handle and connect virtual images of installed operating systems (or even real computers through the network interface of the host notebook)  into a big virtual network. It is really easy to use: Just drag and drop the computers to the desktop and connect them with wires. Actually this program is more than a simulator, as the computers are real images and the packets sent from one computer to another are real also, that is why it is called an emulation. The virtual images needs to be executed by other applications before they are used in GNS3, like VMware, Virtualbox, or Qemu. GNS3 itself is only the network building tool. The GNS3 is an excellent tool to examine the operation of given network topologies before you create it in reality, or if you only want to study it. Note that you have to register prior to downloading GNS3! When installing GNS3 a number of auxiliary applications are also installed automatically, like Wireshark, let it do it! The most important among this is the Qemu environment, which handles the virtual images. (Qemu can be installed individually as well, however, it is not recommended as GNS3 only works together with specific versions of Qemu. So it is recommended to install the version of Qemu offered during GNS3 installation process even if Qemu is previously installed.)

Download the virtual images that will be used by GNS3. Those actually are the images of routers (originally made for home WiFi router devices).
At this point you have two choices:

Run GNS3, cancel the question about servers like Local GNS3 VM (also you can check the box beside Don't show this again), and create a project under any name, than find Preferences dialog box under Edit and create a new Qemu virtual machine template (under the menu point "Qemu VMs") by entering the disc location of the image file you have downloaded previously (if you installed Qemu separately from GNS3 than the location of the Qemu executable (i.e. the ".exe" on windows machines) file should also be entered). This page is the setting of the teplate machine for the routers that we will use in the simulations. Give it a name like "Router", which will be the name you will find the template under. Set at least 128Mbyte memory for the image if possible, and you should also set the number of network adapters emulated for the image on the "Network" tab. Set it to, lets say, 6, that should be enough. The type of the adapter should be virtio-net-pci (others may suffice as well), but if some trouble occurs later on with  it you can change it to 1000Gbps network adapter. It is recommended to change the icon of the freshly created image right away by a mouse-right-click to a router-like icon, which helps you remember that those computers are actually routers. When creating the image do not forget to add the "-nographic" option at Options under Advanced settings tab., that will help us using the consoles to observe the displays of the routers (see also step 6). Before exiting from Preferences check the Server menu and be sure that under the appearing 3 tabs only Local server is checked and GNS3 local server and Remote servers are unchecked!

After confirming the changes we are now ready to drag and drop new objects (routers) to the project editor window of GNS3 using the icons on the left side (the name will be the one you gave earlier e.g. Router). After putting some routers on the editor wire their network adapters together with the wiring tool residing on the left (lowest icon). Be aware that the wiring tool is a toggle like button! This means that once it is toggled on it remains on until you switch it off! As long as it is on-state, some funny things keep happening, like the right button of the mouse does not work etc. Never forget to switch it off when wiring is done!

When the whole network is created you can turn all the virtual machines on at once using the Play icon (or individually with a right mouse click on each of them) and in the context menu called forth by a right mouse click you can chose the console to see the display of the computer as it is booting. If booting is finished you are ready to issue commands as it would be a normal Linux machine.

During practice sessions the Quagga routing software package (its starts by typing "vtysh" to the shell prompt) and the Scapy packet manipulating tool are often going to be used (those packages are already compiled into the Linux distribution image).

Important information for the images:

The first link contains a table for the assignment of students (by Neptun codes) to the paremeter sets that should be used for the homeworks and the following 5 links point to the tasks themselves:

Assignment of parameter sets to students used in the different tasks 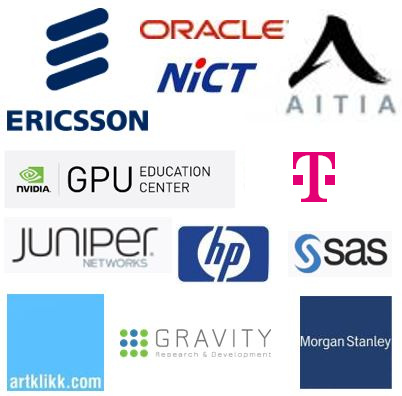